The Ob'enn, also known as "psycho-bears", are an extremely militaristic and expansionist species native to the Tause system. Their stated goal is the subjugation and eventual purging of every race other than themselves, starting with anyone foolish enough to call them cute. For most of their history they have been at war with the reptilian Kssthrata, also native to the Tause, which ended when the Kssthrata used the newly-invented teraport to move their entire civilization to an empty planet far away from psycho-bear space.[1]

The Ob'enn's xenophobia appears to be a cultural thing rather than anything fundamentally wrong with the species.

For the last thousand years the Ob'enn have been racist militants. The race's society would evolve into state of totalitarianism and self-indoctrination. Where they would conduct warfare against the Kssthrata, who share the Tause star system. Their society would develop the goal of race purity for entire galaxy.

Sometime during this period, the Ob'enns discovered weapons cache once owned by the ancient Oafa, which advanced their technology base considerably.[2]

So problematic the Ob'enn would be ultimately contained by the Galactic community due to their xenophobic ambitions. However this would end when introduction of Teraport.[3]

Unbeknownst the Ob'enn, the introduction of the Teraport came expansion of interstellar travel, which gave their hated Ksshrata neighbors the means to finally separate themselves from Ob'enn. After quitely finding and moving its entire population from it's Tause homeworld, the Ob'enn would find themselves thinking they had finally whelmed the Kssthrata defenses, and destroyed the race and it's homeworld. However, Ob'enn would soon discover that they were mistaken, when an article in a media publication proved the Ksshrata had simply left their world empty for them to destroy.[4]

After his capture, former Ob'enn Artificial Intelligence known as Petey would after the destruction of his original self aboard the Sword of Inevitable Justice, best known mercenary warship, Post-Dated Check Loan. A copy of himself would be find it way on another Ob'enn Warship and take it over. He would then use his collective of AIs known as the Fleetmind and conduct a campaign of capturing Ob'enn Warships. Petey himself determined he would stop the races effort to cleansing the universe of all other sentient lifeforms. He would reach number of 750 ships as he would ultimately declare war on the Ob'enn.[5]

During the Campaign, the Fleetmind would capture Ob'enn warships and intern their crews to camps where they would be used as Reeducation camps as attempt begin to recondition Ob'enn into less aggressive and xenophobic.[6] He would eventually succeed in conquering the "psycho-bears".

The War with the Fleetmind would slow down the Ob'enn's conflicts on multiple fronts as it tries conqueror other star systems. However, despite the conflict, the nation would use other methods to distract governments and weaken them in a form subvention.[7]

Under the Rule of the Fleetmind[]

The Fleetmind undertook the attempt to build a gentler Ob'enn society and at the same time has more or less broken the main nation's power; ironic given that Petey was once one of their own Thunderhead-class Superfortresses.

At the height of its power during it's Military Rule, the Ob'enns had the tradition of naming their ships with pretentious names.[8] The Ob'enn are known for building their large warships that would typically dwarf other races naval vessels in size.

Known Ship of the Ob'enns Fleet[]

Scimitar of Irreparable Damage and the Staff of Unyielding Order enroute to intercept UNS Athens and her escorts. 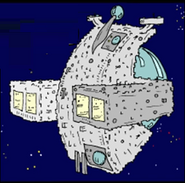 Example of a Thunderhead-Class Superfortress.

Spear of Intoxicating Agony. (damaged & captured during the Fleetmind-Ob'enn War.)