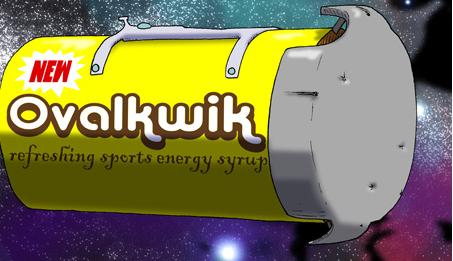 Genuine Artificial Imitation Ovalkwik (a portmanteau of Ovaltine and Nesqwik) is a brown powdered drink mix. It has been described by someone who read the list of ingredients as "a very heavy stimulant cocktail cut with shampoo and inert ultra-tensile carbon". Schlock is addicted to the stuff and usually eats it straight out of the 55-gallon shipping drum, which he calls "The Tub of Happiness". Ovalkwik is also known to have a reviving effect on stunned Amorphs.

Despite Schlock's addiction, he will only accept the Genuine Imitation powder, and dislikes the Refreshing Energy Paste made by the same company.

As a play on this fictional product's name. The official wiki of Schlock Mercenary Webcomic is name Ovalkwiki.