Para Ventura is a civilian contractor who transferred to the Toughs from the Battleplate Morokweng.[1] She is a brilliant roboticist, more skilled in that area than Kevyn, and her urge to tinker is such that robots are terrified of her very presence — in fact, her effect on a laggardly repairbot is what got her hired. She can be petulant at times, and hates not being taken seriously, but by default is quite pleasant. She has a green belt in shotokan karate. Despite her appearance, she is in fact 19 years old. During the Credomar Habitat Escort Mission, she proved her capacity in combat, and was promoted from Ensign to Lieutenant.[2]

Her work includes creating Lota from scratch, repairing TAG after the UNS tampered with him, growing Tagii after TAG went offline, and adding Tailor's surgery programming.

During the Toughs' mission to Oisri, Ventura was revealed to be a spy working for the UNS Internal Affairs Intelligence Corps. She used the cover story of joining the Toughs for reason lack of pay as a civilian contractor.[3] She was immediately relieved of duty, and Tagii was taken offline (the crude method used caused her to develop isolation insanity, which posed a major problem for the toughs). It was revealed a later that Ventura had been covertly implanted with two remote kill switchs, one of which she only discovered after her employers attempted to remotely execute her with it, fortunately after the Fleetmind removed the device.

She later helped the Toughs get the contract and a ship for the Eina-Afa mission (arguably keeping the company from dissolving). She would be reinstated as part of company as the Coxswain, acting as Bristlecone's commanding officer.[4] During the mission helped save the Toughs from a hostile AI. For this she was reinstated, although her rank was reduced from Lieutenant to Corporal. 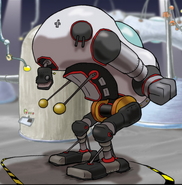 Lota, Longshoreman of the Apocalypse, a creation of Para Ventura from a crippled Outrider Tank. 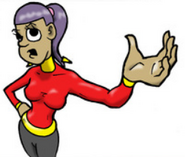 Para Ventura as Ensign when she first joined.
Add a photo to this gallery

Retrieved from "https://schlockmercenary.fandom.com/wiki/Para_Ventura?oldid=6925"
Community content is available under CC-BY-SA unless otherwise noted.