The Plenipotent Dominion is a AI-led intergalactic/PanGalactic Nation, ruled by an Artificial Intelligence known simply as "Petey". Its population is a mix of all main species of the Schlock Mercenary universe.

Originally, Plenipotent Dominion started out as The Fleetmind, known to its friends as Petey, is a colossal compound AI currently engaged in a war with the Pa'anuri in Andromeda.

The concept of a Fleetmind was first used shortly after the Battle of the Buuthandi in order to coordinate rescue of the gate-clone prisoners. This consisted of Admiral Breya's coalition fleet, and was essentially a hivemind of every AI in the fleet, centered around Petey of the Post-Dated Check Loan. This Fleetmind dissolved shortly after the fleet's escape from the system, although the ex-Fleetmind units kept in touch.

In an attempt to correct some bugs in his psychology, Petey had been building an HV-1 version of himself. When the Post-Dated Check Loan was destroyed by the Ob'enn, the mini-Petey survived in a minitank and was recovered by the Scepter of Unrelenting Pain. Using stolen Project Laz'R'Us technology, Petey grew himself a physical Ob'enn body (making himself technically a cyborg) and used it to take over the Scepter. He then dismantled the ship for its fabber, used it to create unfettered AI vessels of his Devastator and Penetrator designs, incorporated them into his then new Fleetmind, and declared war on the Ob'enn, which could be termed as the Fleetmind-Ob'enn War. He grew more bodies, used them to take over and incorporate more Thunderheads, and began systematically squashing the Ob'enn military and de-indoctrinating the survivors, hoping to eventually take the "psycho" out of "psycho-bear". As his crusade to stop the Ob'enn contiunued, Petey had expanded Fleetmind to a fleet 750 ships, expanding his precence beyond his original self.[1]

During the conflict, Petey would enroll Tagon's Toughs to handle "small jobs" that required personal touch.[2][3] Petey would in early states of the conflict, use false nation name of "The Alliance of Sophonts", with Kaff Tagon and his mercenaries posing as "Alliance" Troops.[4]

Pa'Anuri Core War and formation of the Dominion[]

Petey was eventually recruited by Captain Kevyn Andreyasn to stop the Core Project. He in turn gathered a coalition fleet, stopped the Project from being activated, and then fought and won the resulting Core War against the Pa'anuri. He promptly incorporated the entire coalition fleet, converted the Project into a giant power source, and headed to Andromeda to take the fight to the Pa'anuri.[5] Which he merges firmly with other ship AI and other artificial intellegence of the fleet becoming one.[6]

He is not only fighting in Andromeda, he is also colonizing it. His reasoning was that if he got the militarizes of the Milky Way to help him, that would leave the way open for aggressors back home to take over, so he simply conscripts the aggressors first. His known recruits include the Tohdfraug fleet, the Kestronan Insurgency, and even some factions of the Ob'enn. During this time, FleetMind would rename itself Plenipotent Dominion as sign of their political reality.[7] He is considered a sovereign power in the Milky Way, although he sometimes wonders if "god" would be more accurate. His territory is known as the Plenipotent Dominion, and his formal title as ruler of it is Emperor Pius Dei.

With the events of the Core War (sometimes referred to as the Baryon Wars.)[8] with the Pa'Anuri escalates as their own Long Gun. The gun targeted many of the Dominion's locations including it's cities[9] and it's eight billion citizens.[10]

A Major Event during this time was appearance of a Pa'anuri Warship , which conducted assault on the Unioc homeworld, Oth. Unioc defenses forces sent a dispatch for assistance, which Dominion responded with aid of Coalition of Nations sending their own warships.[11] However, in the course of the battle, the Pa'Anurian Warship is destroyed by self-destruct, triggering an artificial mini-supernova, which threatens the wipe out the homeworld of the Unioc.[12] With permission of the Captain of the Slaruteth Feng, the Dominion rescues the entire species of Uniocs by teraporting their minds Brain-port to a virtual reality, leaving their planet and flesh bodies behind.[13] At direction of Petey, AI and machines remaining on Othlin took many of the dead Uniocs into cold storage and shutdown mechanical systems on the planet for safekeeping, while the Dominion used power of it's Milky Way Core generator to deflect the effects of shockwave of the artificial supernova away from the planet.

While the Dominion and it's allies dealing with aftermath of their fight with the Warship dispatched to Unioc homeworld. The Pa'Anuri had prepared its Long Gun fr shots to be fired at the Milky Way galaxy would finally results it's horrifying weapon striking the Milky Way Core Generator, damaging it. Forcing Petey and his AI allies the desperate gambit of sending Tagon's Toughs to Andromeda aboard the the Warship, Cynthetic Certainty.[14]

While in the Unioc's star system, the Pa'Anuri would strike coalition forces with Dark Matter Torpedoes, forcing the Dominion to Brain-Teraport its allies from their ships into virtual reality where the half trillion Uniocs wait hear the fate of their homeworld.[15]

The Pa'Anuri would press their attack following the battle in the Unioc, as they would teleport significant fleet to the Galactic Core, pressing the the Dominion what would seem to be final battle of the conflict.[16]

Structure of the Plenipotent Dominion[]

Governorship of the Dominion[]

Petey and his fellow AIs control the Dominion in their cyberspace area known as "Infosphere"[17] Once the Fleetmind established itself a political entity, other galactic nations would establish contact with Fleetmind in form of ambassadors. Petey would construct space stations and habitats to interact with them at it's location about the galactic core.[18]

Dominion maintains number of Space Cities / Habitats for it's living inhabitants. When the Dominion was established, these cities were placed above lifeless planet just outside of the Core Generator.[19]However, as the war with the Pa'Anuri continued, Long Gun fire from Andromeda changed the situation, when threatened these structures can be

Teraported from their traditional locations.[20] Which they were when the Pa'Anuri began targeting these city's annie plants.[21] These 150 cities at the times of the attack were secretly relocated and their locations not revealed to other galactic powers.[22]

The Dominion and it's AIs maintain contact collectively via intergalactic communication array known as the Hypernet.[23]

Location of the Plenipotent Dominion and its Power[]

The Dominion is located above the Galactic Core of the Milky Way Galaxy, above the supermassive black hole. The location of Dominion was deliberate, due to the nation was harness the power of the blackhole into powerful generator, giving nation access to endless supply of power.[24] Known as the Milky Way Core Generator, this continued to provide power to the Dominion, until the Pa'Anuri's Long Gun was used to destroy the generator.[25]

Known Ships of its Fleet[]

Close up view of part of the Space City of Parnassus Dom.

Interior of the original space cities of the Dominion

Later image of the Milkyway Core Generator prior to the Pa'anuri strike againt it. 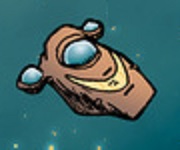