The Post-Dated Check Loan, originally the Sword of Inevitable Justice, was a Thunderhead-class Superfortress and the second ship owned by Tagon's Toughs.

The ship was originally a part of the Ob'enn military, but with the help of a traitor was taken over by the enemy Kssthrata, who wiped out the entire crew in the savage battle. The thousands of Ob'enn corpses were flushed into the waste system, and a high-pressure gas line was used to try and clear the resulting blockage. Due to some bizarre quirk of hydrodynamics, the gurgling of the air trapped in the plumbing sounded exactly like an evil voice saying things like "YOUR SOULS ARE MINE", which caused the Kssthrata crew to abandon it and the AI to go insane.[1][2]

Looking for a new ship after the destruction of the Kitesfear, Captain Tagon came across the ship on hBay at a ridiculously low price and bought it immediately. On the way back to the company's temporary offices, they cleared the offending air out of the plumbing, and stabilized the AI by ordering it to repress the whole incident. The AI rechristened the ship to Post-Dated Check Loan and acquired the nickname Petey from the resulting acronym.[3]

The PDCL was a far, far mightier ship than a mercenary company the Toughs' size could reasonably expect to own. It participated in the aftermath of the Battle of the Buuthandi, and was the core of the first Fleetmind. Petey also planned the 'paid five times' gig, became the second vessel ever to be equipped with a teraport, and was banned from Sol system for being too big and scary. The ship's campaigns also included the battle for the Nejjat wormgate, the mission to Ghanj-Rho, the Magic Dreamland Entertainment gig, and the Princess Tyola diamond beetle extermination.

The Post-Dated Check Loan was destroyed when Ob'enn agents took it over and cancelled all of Petey's standing orders. Since this included the 'repress and deny' order, Petey promptly went insane and self-destructed. The Toughs were left only with a single troopship, which they upgraded into a pocket cruiser and named Serial Peacemaker. However, a copy of Petey would end up making good his escape from the doomed ship leading to his independence. 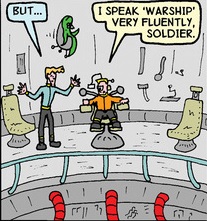 View the Command Deck of the Post-Dated Check Loan prior to Petey's activation.