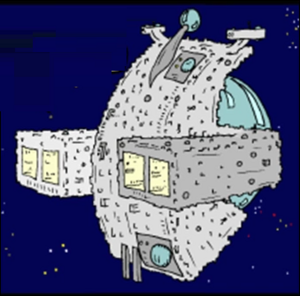 The Tausennigan Ob'enn Thunderhead-class Superfortresses were in their time among the largest, most powerful and best-known warships in the galaxy. The militaristic psycho-bears built whole fleets of them, in accordance with their philosophy of galactic subjugation and eventual cleansing. Only seven exist outside Ob'enn space.

Stretching almost a kilometer from jibbenmast to gravystem, a Thunderhead can deploy up to sixteen Dragon-class warships. In addition, a Thunderhead has room for a crew of 200 and a drop-complement of about 10,000, as well as a huge fabber and immense carriage space. Although the exact weapons payload of each ship may vary, both terawatt masers and twin-octuple banks of railguns are common for the design. The ships are a match for entire UNS carrier groups, although not quite as mighty as the battleplates.

Petey the Fleetmind used the Thunderhead design as the basis for his Devastator- and Extortionator- classes, and in fact Petey himself was once the AI of the Post-Dated Check Loan, a Thunderhead previously known as the Sword of Inevitable Justice before falling into the hands of Tagon's Toughs. Some where captured by Fleetmind and were added to it's growing fleet ships during the Fleetmind-Ob'enn War.[1]

Other Ob'enn craft include the thousand-kilometer-long homeworld-defense ship Cloak of Untrammeled Dignity, the tank and minitank designs used by Tagon's Toughs, and the troopship line from which the Serial Peacemaker was drawn.

All Thunderheads seem to have the large central section, the massive annie-plant, two conning towers at the top of the central section, two stalks sticking off the bottom (except in one case, where the launch bays are on the bottom), a number of backup annie-plants in differing locations (usually three), and a number of launch bays (usually four, sometimes two or three).

The layout of these components differs from ship to ship. Known layouts include: