The Touch-and-Go (abbreviated TaG) was a modified 450-meter Daehremmah destroyer, and the fourth ship owned by Tagon's Toughs.

The ship was originally the Integrity, the flagship of Pranger's Bangers, but the ship crashed during the mission to Ystre, and with a little meddling from the Fleetmind the Toughs were granted salvage rights. Having just lost their previous ship, the Serial Peacemaker, to Pa'anuri combat at the Galactic core, the Toughs refurbished it and named it the Touch-and-Go. The Touch-and-Go would take more damage and undergo more repairs on-panel than any other Toughs warship.

The ship had three principal sections: The main body, it's forward bow referred to the blade (like a shovel), and it's conning tower which house the bridge. The ship featured two large swimming pools / recreational areas, which were prone to flooding the ship when artificial gravity was lost.

The original AI of the Touch-and-Go was TAG, under whom the ship participated in the destruction of HTRN, the smashing of Shufgar's pirate ring, the defection of King Xinchub, and the relief mission at Credomar.

At Credomar, TAG went permanently offline after a crisis of conscience[1] brought on by causing the deaths of several civilians to prevent a greater disaster. The ship itself was also severely damaged by uncontrolled bouncing inside the habitat's interior, and later broke into two pieces during flight[2].

The ship spent the Massively Parallel arc being repaired at High Olympus Shipyards, where its original 450-meter design was radically altered[3] into a more compact[4] 300-meter shape for cost reasons, but was made spaceworthy in time for the rescue of General Karl Tagon and Captain Kevyn. Para Ventura created Tagii (short for Tagioalisi) to serve as the ship's new AI.

Under its new AI Tagii, the Touch-and-Go provided overwatch and teraport interdiction to secure the planet-sized artifact Oisri for The Gavs. UNS intelligence, under the command of Fleet-Admiral Manyara Emm of the UNS Morokweng, attempted to seize the artifact. Tagii fended off the initial assault by a half-dozen Chiphethran-Class Corvettes[5].

Shortly afterward, Gunther Thurl discovered covert signals being transmitted by Tagii, and suspected she (and her creator Para Ventura) were responsible for the brain-hacking of the Gavs, leading him and Ebbirnoth to disconnect her AI core and take control of the Touch-and-Go.[6]. Tagii was indeed compromised by Para Ventura (working under deep cover for the UNS Internal Affairs Intelligence Corps[7]), but had actually been jamming the brain-hacking, which was being orchestrated from the Morokweng by Colonel Krum and Seargeant Kowalski. With the AI disabled, the UNS were able to turn nearly all of the Gavs on Oisri into brain-clones of Kowalski.

For lack of another AI that had not been compromised by Para, Tagon reluctantly put Ennesby in charge of the Touch-and-Go.[8] However, Ennesby was unable to take full control of the ship's systems. Due to Para's non-standard AI design being improperly disconnected by Thurl, Tagii remained active in the processors. Running at vast clock-speed while disconnected from sensory input for hours, she experienced subjective millennia of isolation and was driven homicidally insane,[9] seeking vengeance against her crew (especially Thurl and Para).

Under attack by both the UNS and a Pa'anuri emerging from Oisri, Tagii lured the Morokweng to Oisri orbit in order to force it to permit her escape via Mutually Assured Destruction (at this point, both the Touch-and-Go and the Morokweng were preventing each other's escape via teraport denial). The Morokweng instead shut down its annie plants to evade the attention of the Pa'anuri[10], but this left it unprotected against a suicidal assault from Tagii. By ramming the unshielded battleplate, Touch-and-Go was able to withstand its point defenses long enough to breach the hull and fire its own entire arsenal once inside, as well as leading the pursuing Pa'anuri to penetrate the battleplate and destroy it.[11]

After escaping from Oisri, Tagii was disconnected (and seemingly destroyed) by a secret voice-activated kill-switch Para had installed.

Fate of the Ship[]

With the Touch-and-Go critically damaged and hunted by the UNS, the surviving mercenaries fled to Parnassus Dom in Plenipotent Dominion space. Petey determined the ship to be a total loss due to both its annie plants and its hull being irreparably damaged. The Touch-and-Go was permanently decommissioned and recycled, becoming the third ship to be destroyed under Kaff Tagon's command over the course of the story.[12]

The grounded former Mercenary Warship ,Integrity, prior to being claimed by Tagon's Toughs.

Touch and Go being pulled apart from Terra Firmator.

Touch-and-Go after being refitted from damage with it's collision with the Terra Firmator.

Touch and Go experiencing structural failure after accelerating to fast from physically damaging after the Credomar mission.

Newly Refitted (and shortened) Touch-and-Go in the High Olympus Shipyards of Mars.

Post-Refit of the Touch-and-Go departing Mars 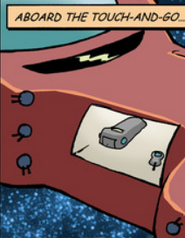 Insane Tagii ramming the ship though the UNS Morokweng during a Pa'anuri attack.